Sedans have become the Jan Brady of automobiles. They’re overlooked and underappreciated, as consumers lavish firstborn attention on SUVs, or coo over the latest electric babies.

So when the all-new 2022 Mercedes-Benz C-Class was announced, the news didn’t exactly light the world on fire. But now that I’ve driven the standard C 300, I feel a bit guilty for overlooking its significance, at least for SUV refusniks determined to keep their feet and seat closer to the ground. In fact, this new C-Class is a tremendous addition to the sedan ranks. It’s tastefully styled, more richly appointed and technically replete than any rival, and immensely satisfying to drive. And its all-around excellence bodes well for versions to come. They include a 2023 AMG C 43 Sport later this year, with standard AWD and rear-wheel-steering; and a skin-flaying 402 horses from a 2.0-liter four-cylinder with 48-volt hybrid assist and electric-boosted turbocharging.

Tally the current generation’s full lifespan, and the C-Class has remained the most-popular Mercedes; whether here, in China or around the world, with 2.5 million global sedan-and-wagon sales since 2014. But a model that was finding more than 85,000 U.S. buyers a year in the mid 2010’s couldn’t escape the industry’s sedan tailspin, including just under 31,000 sales last year. Time to shore up the franchise, even if the GLC-Class SUV is now ensconced as the family sales star — Mercedes’ Marcia, if you will — with 51,000 customers in 2021. 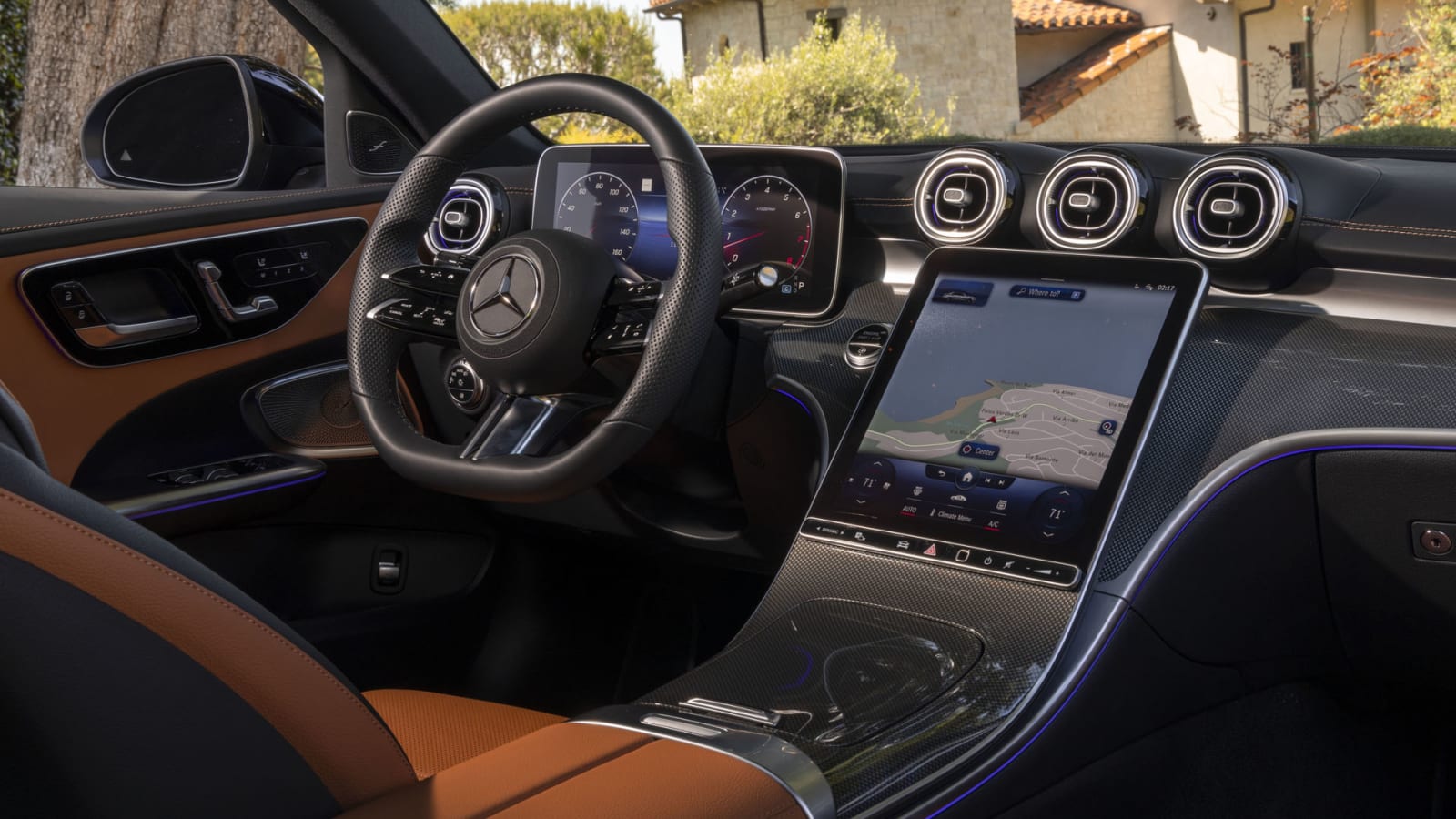 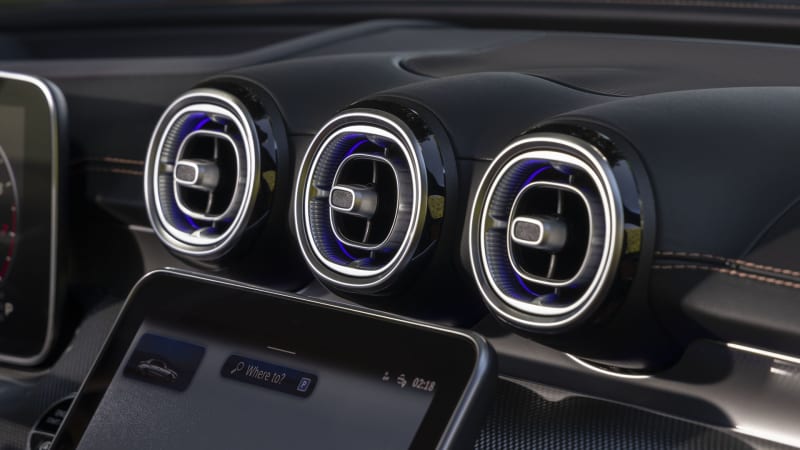 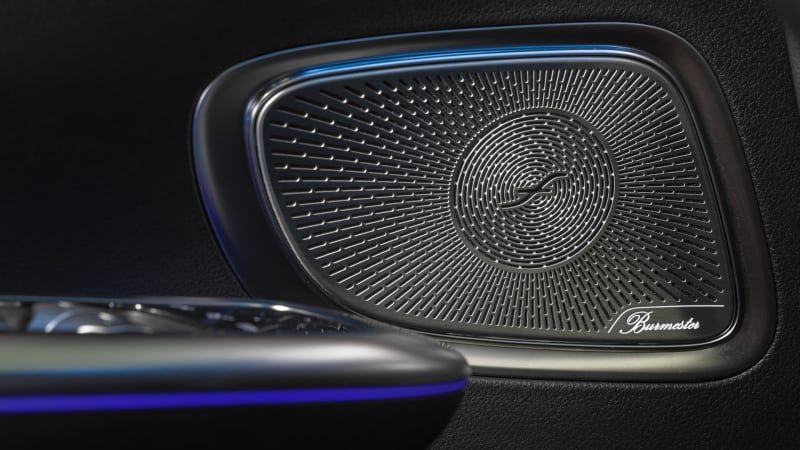 To do it, Mercedes climbed to its top shelf to raid key S-Class features, including its dramatic 11.9-inch portrait-oriented touchscreen that’s been subtly tilted six degrees toward the driver for use in the C. It also gets the latest safety and semi-autonomous tech, and options such as augmented-reality navigation and a color head-up display. That’s all wrapped in a slightly roomier interior that nods gracefully to the S-Class — with flattering stuff like laser-cut Burmester speaker grilles, ambient lighting, polished metals and natural-grain woods — while giving up almost nothing in luxury to the midsize E-Class. We’re not sure the last C-Class ever gave up its status as King of the Cabins in the compact sport sedan segment, but the new car’s grip on the throne is unquestioned. It also now has the most rear legroom in the segment, at 36 inches. That’s just 0.2 inches shy of the larger E-Class’ back seat.

The previous C-Class’ body creases are softened, amplifying the streamlined “catwalk” shoulder line. And the former, somewhat chunky butt and blobby taillamps are reshaped to appealing effect. Slender two-piece LED taillamps, a first for a C-Class, sweep across the trunk lid and narrow into sharp points. At the opening of our two-day drive from New York to the Catskills mountains and back, the C-Class seemed almost too demure. But this finely proportioned sedan, and its nothing-to-prove elegance, grew on me almost immediately. The C’s more-classic design is far more successful to me than Mercedes’ eggheaded EQS.

Mercedes stretched the new model by 2.5 inches to 187 inches (just shy of an Audi A4 or Cadillac CT4, and 1.3 longer than a BMW 3 Series), with a 1-inch-longer wheelbase. It’s roughly a half-inch wider and lower. There’s added shoulder and elbow room front and rear, nearly an inch more rear legroom, and 0.4-inches more rear headroom despite the lower roofline. A standard, clamshell-style panoramic sunroof boosts the spacious impression. Split rear seats fold, including via switches in the trunk, to open up more versatile space. 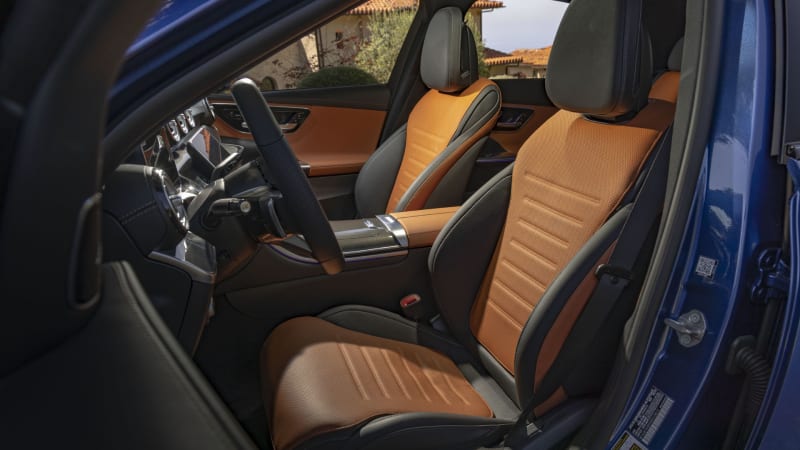 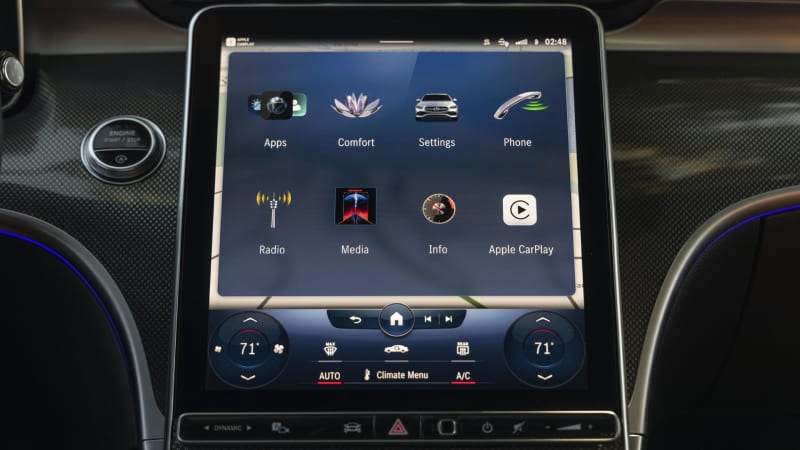 As noted, that interior is a treat. Generously bolstered seats integrate pivoting headrests on single posts, with a range of interior colors and treatments — a racy red-and-black combo, or brick-like AMG Sienna Brown with natural wood pinstriped with real aluminum. Ambient lighting decorates the doors, dash and aircraft-inspired metal vents with a choice of 64 colors. Architects would dig the cantilevered armrests and “floating,” light-rimmed door-control housings. A three-spoke steering wheel looks as good as it feels, as do bright-metal paddle shifters as cool and polished as river stones.

MBUX infotainment, despite the improvements gleaned from the bigger screen, still requires a first-time learning curve. But once your steering-wheel thumbs and brain are trained, MBUX really is a nifty — and undeniably eye-popping — way of navigating today’s data-heavy automotive landscape. One exception is the control chiclet on the left-thumb side of the wheel, which manages the graphically rich, freestanding driver’s display, including full-screen 3D map views: Too often, it mistakes a left-right thumb sweep for an up-down, and gets a thumbs-down for blowing a radio-station change or other operation. Yet the optional Augmented Reality navs still amazes, superimposing directional arrows, street signs and even addresses over a real-time camera environment. (The addresses that hover and disappear, Rolodex-style, on final approach to a hard-to-find business or rural driveway, are a tech godsend).

The option of adopting the new “Zero Layer” home screen design first seen on the EQS smartly avoids digging into distracting menus. It keeps a map view in sight at all times, flanked by main “module” tiles and individualized “magic modules” controlled by machine learning of a driver’s history and behavior. In one example, if the car figures out a driver tends to call a partner on the daily route home, it places the phone number onscreen at-the-ready. A biometric fingerprint reader can keep those behavior-based predictions and other matters private, unlocking MBUX for individual users, their calendars, e-mails, payment authorizations, and more. Online music services are now integrated into the MBUX ecosystem. Apple CarPlay and Android Auto are standard. To all that, the C-Class adds the latest “Hey Mercedes” range of conversational, Siri-style voice commands. 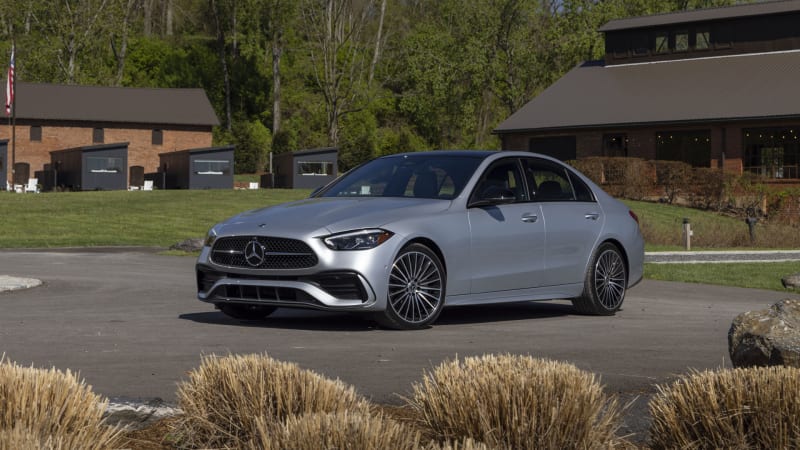 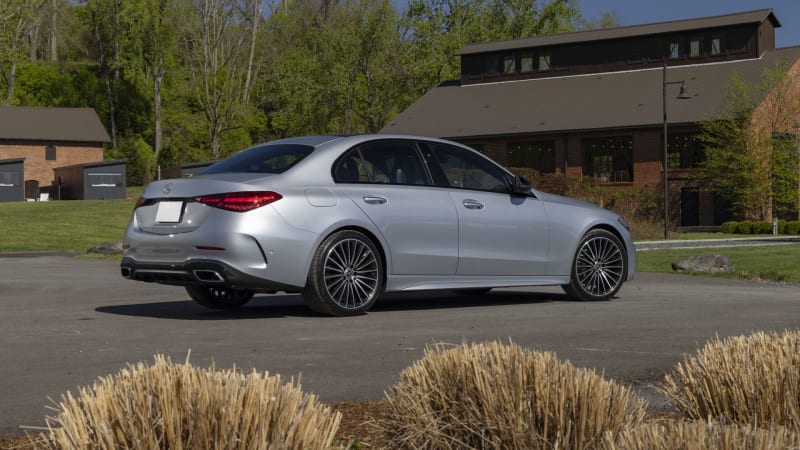 Fortunately, when it’s time for fingers to seize the steering wheel, the C 300 is equally capable. Sport-sedan number-crunchers might see the C 300’s four cylinders, 255 horses and 295 pound-feet of torque and say “Where’s my AMG?” Peak horsepower is indeed unchanged from 2021, with 20 more pound-feet of max torque. But the C 300’s secret weapon is the M 254 2.0-liter engine. The all-new powerplant combines the topline features of Mercedes’ modular four- and six-cylinder engine family for the first time. Those include patented “Nanoslide” cylinder coating, the weight-saving, friction-busting tech also used in Mercedes’ F1 powerplants. The engine integrates a 48-volt mild-hybrid system; and a new twin-scroll turbocharger whose tech was also developed in conjunction with Mercedes’ Petronas F1 team — and previews potentially record-setting four-cylinder power on AMG C-Classes to come. The hybrid system supplies temporary-yet-potent bursts of up to 20 horsepower and 148 pound-feet of torque. Its starter/generator delivers nearly imperceptible start/stop engine functions. The electric motor, cooling and power electronics are all packaged in (or on) the slick nine-speed transmission for weight-and-energy efficiencies; including energy recovery and gliding with the engine off.

Mercedes’ estimate of a 5.9-second squirt to 60 mph isn’t conservative, it’s sandbagging: 5.3 or 5.4 seconds seems more like it. During our spring fling in the Hudson Valley, if someone had told me this Benz had 300 horses, I’d have believed it. The motor isn’t an exciting revver, with full-throttle upshifts coming just before the 6,400-rpm redline. But the electric surge and slick transmission ably fill any gaps in the engine’s armor. The new engine sounds better as well — surprisingly husky at full throttle, as hushed on the highway as any library-like Benz.

Add a seriously dialed-in suspension, and the C 300 was up for Dirty Dancing in the Catskills, especially in a Sport Plus mode that amps up already-sharp throttle and gearbox response. The C 300 gripped like crazy on handsome, optional 19-inch, multispoke AMG wheels with summer tires. Eighteens with all-season rubber are standard. The ride is firm, but never punishing. There’s a touch of body roll, in the manner of any base-model sport sedan, but all part of the experience. 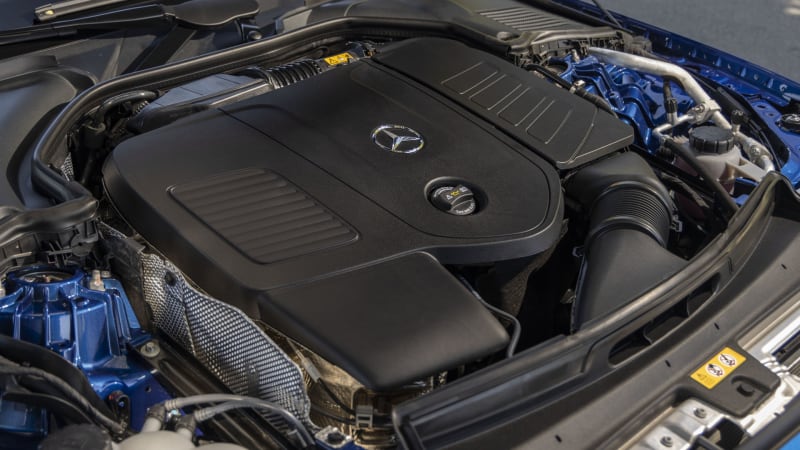 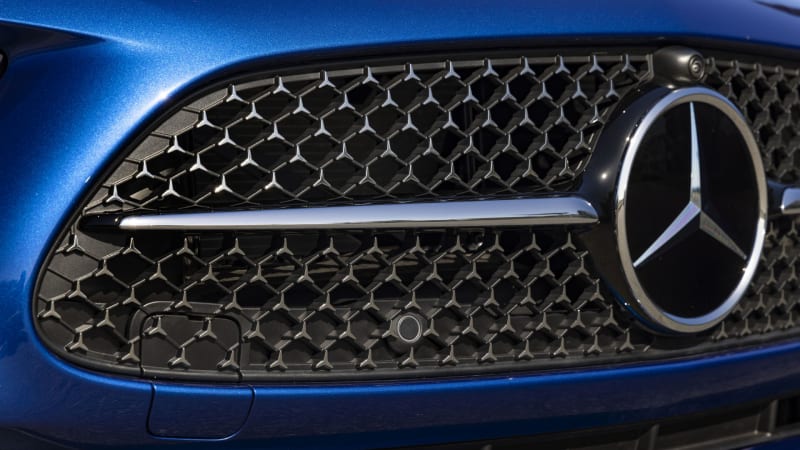 This C 300 reminded me, again, that you don’t need 500 horsepower to have a good time. A bit like a Honda Civic vs. a Type R — yes, Mercedes, this is a compliment — the C 300’s eager four-banger and supple, dialed-in chassis had me wondering why I’d need to spend more on a hopped-up AMG version. So what if passing takes a touch more advance planning, or just keeping your foot in it longer?

Improved fuel economy is the green icing on the cake: The EPA credits the C 300 with 23 mpg city and 35 mpg highway, the latter representing a 2-mpg gain versus last year. The EPA may be understating things: Keeping the speedo just under 70 mph, I manage to eke out a remarkable 41 mpg over a 60-mile cruise. The nine-speed gearbox keeps the engine burbling at just 1,400 rpm at 70 mph, and 1,700 rpm at 80 mph. Later, even after multiple romps past highway dawdlers, backing off still keeps the C-Class around 37 mpg.

Regarding pricing, 2022’s simplified lineup strategy offers three distinct trim lines — Premium, Exclusive and Pinnacle — with far fewer à la carte options. So a C 300 Premium starts from $44,600, rising to $46,850 for an Exclusive and a Pinnacle at $48,500. For all models, an improved 4Matic AWD system, that can divert more torque to the front axle for improved dynamics, adds $2,000.

The C 300 Pinnacle test car reached $57,970, with add-ons such as a $1,950 Driver Assistance Package that adds more than a dozen safety and semi-autonomous features. But a disciplined shopper can easily keep this C-Class closer to $50,000, especially if your geography and outlook don’t demand 4Matic AWD.

As Mercedes has assigned models like the GLA-Class to work the door and welcome entry-level shoppers, the C-Class — once called the “Baby Benz” in 190 guise —has been allowed to grow, mature and earn its higher status in the brand household. This new model underlines that Mercedes’ move was the right one, even if SUVs hog the limelight and showroom floors. This C-Class is a true aspirational sedan for grown-ups of any age; a junior-suite S- or E-Class that’s still compact, sporty, fuel-efficient and not at all stuffy. It’s not inexpensive, and the really pricey, powerful stuff is yet to come. But drop $50,000 on this C 300, and I guarantee you’ll feel like a million bucks.

Ford boosting Mustang Mach-E production, cutting price by up to $5,900